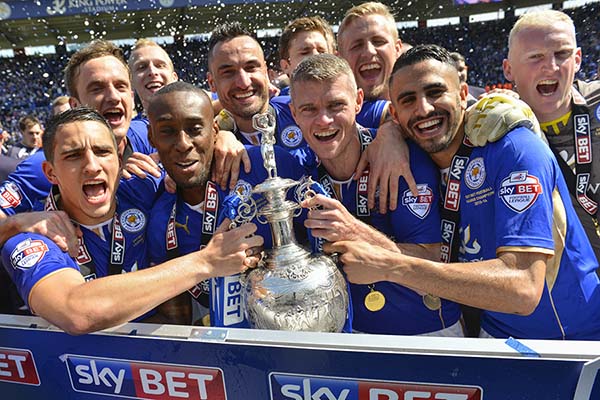 The whole world is just a couple of weeks removed from Leicester City’s historic and somewhat miraculous run in the Premier League, wherein they went from being relative unknowns to taking sports immortality in a span of nine months. At the start of the season, this unlikely scenario encouraged bookmakers to peg the club a 5,000-1 underdogs to win the title. As a matter of fact, according to The Telegraph, this number is akin to finding Elvis Presley alive this year.

To put things in perspective, Leicester City’s astonishing campaign has already led various entities to prematurely predict possible underdog stories for next season. Betfair even has a football article that talks about the manager roulette within the league and the likelihood of some clubs to duplicate City’s stellar run. In Alex Keble’s piece on the website, he focused on English clubs that have made significant coaching and player changes, as well as the odds of winning the title next season and doing ‘a Leicester’.

This is just proof of Leicester City’s influence in the whole sporting landscape. But if you’re not a big fan of football – or sports in general – you can’t help but root for a true-to-life underdog story. Who knows, maybe subconsciously, you’re feet are beginning to have that itch to discover the fascination behind this celebrated city. Lucky for you, here are some suggestions on how to enjoy Leicester away from the bright lights of the King Power Stadium.

Explore the Beauty of Nature

Amidst the bustling streets and the busy airports, England offers an abundance of calming green spaces; and Leicester is no exception. Here you can explore over 130 parks and open spaces across the city, where natural beauty spread out to present tourists with viable options. From wildlife areas and waterways, to flower gardens and ancient ruins, each has a distinct set of features that capture the essence of Leicester. Among the tourist favorites are Bradgate Park and Tropical Birdland.

Go on a Cultural Experience

For a more cultural experience, you can visit Leicester City Museums that have a vast collection of artifacts such as the world-famous Charnia fossil and the rare Victorian beam steam engines. The city also has the UK’s largest dedicated space exploration and science establishment in the presence of the National Space Centre. Furthermore, the New Walk Museum and Art Gallery will feature Fearless Foxes, an event that celebrates the remarkable rise of their beloved football club to global stardom. Best of all, this exhibition will be free to the public as soon as it opens in June.

Shop Until You Drop

Of course, your UK trip wouldn’t be complete without going on a shopping adventure, as Leicester offers plenty of boutiques, markets, and specialty stores throughout the area. There’s Highcross, where some of the biggest fashion brands converge under one roof. You’ll also find a four-story John Lewis branch here. On the other hand, Haymarket Shopping Centre presents you with an alternative on how to look like a royal icon without spending a fortune. The place is situated beside the Clock Tower and has a range of reasonably priced fashion finds of different styles and sizes.

Altogether, Leicester is more than just a place that houses a phenomenal football club, it’s a city where tourists and locals can truly enjoy the natural, cultural, and aesthetic benefits of travelling.

Facebook
May 20, 2016 Admin Uncategorized
AdminThings to Do When Travelling to Leicester, England05.20.2016
This website uses cookies to improve your experience. We'll assume you're ok with this, but you can opt-out if you wish.Accept Read More