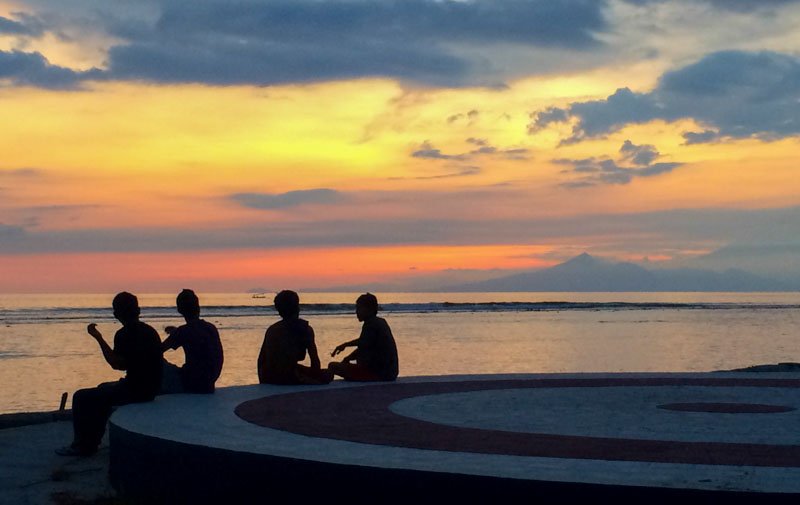 Just a ferry ride away from Bali are the beautiful islands of Gili Trawangan, Gili Air and Gili Meno.

I stayed on Gili “T”, where I put my new scuba certification skills to the test. And this was the absolute perfect location to do it! The water visibility was amazing and the ocean teaming with an incredible variety of coral and fish.

When I arrived and checked into Gili Yoga, I was half-drugged from the dramamine I had taken, just in case my seasick-prone-side decided to rear its ugly head. And I was incredibly hot and fatigued after lugging my suitcase from the dock in the dead heat of the midday sun. A fun fact is there are no motorized vehicles allowed on this tiny island, just bikes and horse carts. Which is fantastic. Except when you are about to keel over in a medicated state. And I couldn’t take a nap because I hadn’t realized this was a Muslim island, so the afternoon prayers were playing on the loudspeaker, rather close to my lodging, right as I was checking in.

That aside, Gili T and I totally got along.

I rented a bike and in a leisurely couple of hours, I circled the entire island. These are some of the quaint eateries, hotels, shops and beaches I discovered along the way.

I carried my snorkel mask everywhere I went because I never knew when I might spot a turtle just 10 feet offshore. I’d wade in waist-deep, duck my head beneath the water and be surrounded by as many as six hawksbill turtles feeding on the sea grass. Totally amazing.

I stopped to get a massage for $15 or less at one of many massage spas, whenever the urge struck. That happened often.

I spent hours in the late afternoon sun ambling along less-crowded stretches of beach, combing the sand and shallow waters for shells. This is one of my favorite things to do on any beach in the world, especially in the wee morning hours or as the sun is fading. You never know what you’ll find. I entertained myself making word art with the prettier pieces of coral I found.

Have you tried the Outbound App yet? It’s where like-minded travelers connect! www.OutboundApp.org

And I went scuba diving. It. Was. Awesome. I’d wake up and walk over to Manta Dive to join the 9 am dive, where we would cruise for 10 minutes on a boat to one of the many dive sites. On the first day, I dove Shark Point.  We descended to a 60 foot shelf, then did a drift dive where I wanted to shout “Wheeeee!” as the current whisked me along like I was at a water park (so fun!), and then did more exploring at a 30 foot shelf. We saw three baby whitetip sharks, turtles, needlefish, anemones, lionfish, blowfish, angel fish, sweetlips and clownfish, not to mention huge sea fans and coral. The second day I dove Manta Point, and although I didn’t spot any mantas, I saw more sharks and lionfish, along with a cuttlefish, a bandit sea snake and a bat fish.

Although Gili T is known as the ‘party island’ of the three Gilis, I was in bed by 9 pm each night. I was flying solo, and I had been traveling for almost two months straight. I was happy as a clam (pun intended) to just chill. Plus, I was a little nervous about my first dives post-certification, and I didn’t want to be hungover and feel like death on the boat. Or worse, I didn’t want to put myself, and the little hole in my heart, at risk of any danger by not being in the best shape possible.

My verdict of Gili Trawangan: hooked. I would definitely return to the Gilis, and next time I’d check out Gili Air and Gili Meno. Have you been to the Gilis? Which island is your favorite?

Although my room at Gili Yoga was fine, I probably wouldn’t go back. On my bike ride, I decided I liked the south side of the island best for lodging and the north side best for hanging out during the day to swim and snorkel with the turtles. I wouldn’t necessarily stay in the north as it was fairly removed from the main strip (unless you want quiet & seclusion) and there were unlit and non-bike-friendly sections of the road.

So drum roll…these south island hotels would entice me to go back: Hotel Vila Ombak, The Trawangan Resort, and the Pearl of Trawangan.

ABOUT: Nikki Near and Far is an Outbound Ambassador. She’s a San Francisco-based adventurer who marvels at natural wonders, world cultures and really old stuff. She’s talented at eating cheese and chocolate, making crafts and climbing mountains. If you’d like to read more visit: www.nikkinearandfar.com

Facebook
April 15, 2015 Admin Travel, Uncategorized
AdminGili Islands – A Scuba Diver’s Paradise04.15.2015
This website uses cookies to improve your experience. We'll assume you're ok with this, but you can opt-out if you wish.Accept Read More