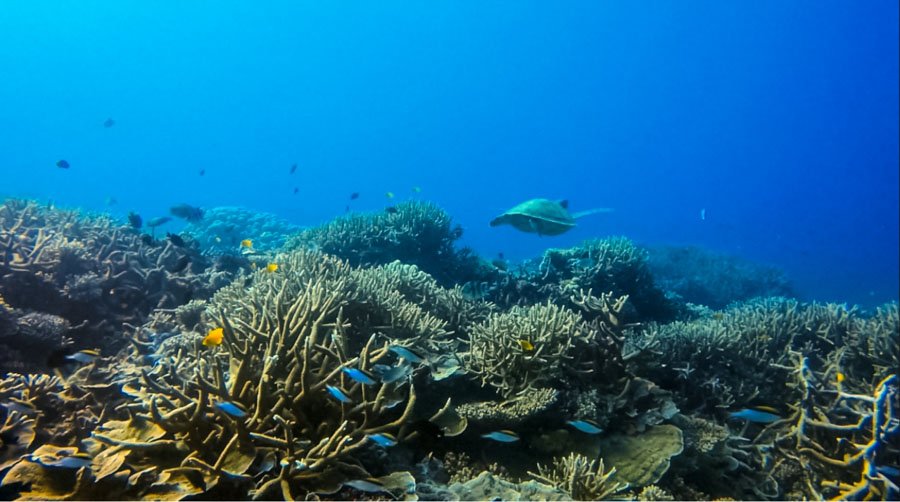 Are you looking for a holiday destination where you can truly escape the hustle and bustle, completely disconnect from the outside world and reconnect with nature? Then Heron Island is the little oasis you have been looking for. Aside from staff and invited guests to the Heron Island Research Centre, this is an exclusive island for Heron Island Resort guests only, there are no day-trippers, and, with television-free rooms, no mobile phone reception and limited wifi this is your chance to let go for a few days, to completely escape, if you can control your anxiety about not being connected to the outside world for a few days that is!

This tiny island sits right on top of the southern tip of the Great Barrier Reef, which completely surrounds the island. It’s so small in fact that It only takes 20-30 minutes to walk all the way around the island. Just what you’ll see on that trip around the island does vary depending on the time of year. For example the Turtle egg laying season begins in November with the last of the hatchlings appearing May/June. While bird life really take off December to March with over 100,000 birds on the small island! Then of course from June to September you’ll also see Humpback Whales breaching along reefs too.

With all the excitement and joy I had on the island though, there were also moments of fear and sadness. Not fear for what lies beneath the waters or lurking in the coral canyons, but a fear that my future grandchildren, in fact even my 4 year old daughter, may not ever have that same opportunity to see the reef as it is today but rather only as a totally bleached, dying or dead reef.

It sickens me to think that. To have to explain to them we possibly had the chance do something about saving the reef but we left it too late for them. The Great Barrier Reef may well sit on the Australian coast line, but this is not an Australian priority, this is a human priority globally. We all need to take action now, not next year or leave it up to someone else.

Now, I don’t want to paint the rest of this story into all doom and gloom, as there are in fact positive things happening, however I hope this serves as a harsh reality check for those that may not have been aware of how serious the situation is.

There is no denying it, the Great Barrier Reef is severely under threat from not just climate change, but also poor water quality, coastal developments and also illegal fishing. We’ve now had an unprecedented coral bleaching event 2 years in a row, with one before that in 2002 and 1998 before that. That is unsustainable, if it happens again over the next 24 months we could be on the brink of an ecological collapse of the oceans due to other marine life affected by the dead corals. As coral, if not completely dead already, can’t rejuvenate when bleaching events are so close, it takes the fastest growing coral 10 years to recover after a bleaching event

Now of course, if you are making the 2 1/2 hr ferry (or 20min sea plane) journey out to Heron Island, then high on your to do list has to be diving on the reefs. As Heron Island boast some of the world’s most incredible reefs to dive on, along with an absolute abundance of amazing marine life such as turtles, huge manta rays (I saw 4 manta rays on one dive!), black and white tip reef sharks and so many large and small colorful fish, not to mention the migrating humpback whales too. All 20 of the dive spots are just a 5-15 minute boat trip from the Heron Island Jetty. There are huge coral cathedrals, the famous Heron Bommie and more.

It’s a very special place indeed, but don’t just take my word for it though, two of the worlds most respected nature explorers, Jacques Cousteau & Sir David Attenborough rate it as one of their most favourite places on earth. In fact, Sir David Attenborough is so passionate about saving the reef that he has a dedicated site just for it here, with Heron Island featuring prominently.

However you don’t even have to be a qualified diver to experience the spectacular marine life and coral gardens, you can simply snorkel right off the beach near the jetty, out to the wreck or around on North Beach or Shark Bay. The choices are endless. In fact, you will see snorkelers from dawn to well after dusk, depending on tide times. In reality the most dangerous animals you will encounter will be possibly the cone shells, do not pick them up, and of course always wear protective footwear when walking out at low tide.

Aside form the diving and snorkelling there is of course still plenty to do. Make sure you get yourself on a guided reef walk at low tide to learn all about the smaller critters on the reef. Or book into the spa for a little pampering too. For the children there is also a great Junior Rangers program to keep them occupied for a couple hours too. I’d also highly recommend the tour of the Queensland University Research Centre on the island too, they are doing incredible work on the island, in particular studies on protecting the reef, which I will get to shortly.

It is one of the greatest, and most splendid natural treasures that the world possesses

According to the Australian Bureau of Meteorology, the Great Barrier Reef recorded its hottest-ever average sea surface temperatures for February, March, April, May and June 2016 since records began in 1900.

When combined, this six-month period was also the planet’s warmest half-year on record, with an average air temperature of 1.3 degrees Celsius higher than the late 19th century. June 2016 marked the 14th consecutive month where the monthly global temperature record was broken, the longest such period in the 137-year instrumental temperature record.

Just a couple month ago, ARC Centre of Excellence for Coral Reef Studies completed their report on their aerial surveys for 911 reefs along the Great Barrier Reef

Of all the reefs we surveyed, only 7% (68 reefs) have escaped bleaching entirely. At the other end of the spectrum, between 60 and 100% of corals are severely bleached on 316 reefs, nearly all in the northern half of the Reef

At the time of putting this article together, the 2017 G20 Summit was being held where the world’s leaders (minus the POTUS), reaffirmed their commitment to the Paris Climate Agreement, in fact agreeing to aim lower than the 2-degree global average rising temperature target.

In the same week South Australia announced that Elon Musk’s Tesla has committed to building the world’s biggest lithium ion battery to be connected to a wind farm. Plus, Al Gore was also in the country promoting his movie An Inconvenient Sequel as well.

While at the same time the Australian Government was wheeling and dealing with a company called Adani to build Australia’s newest and largest coal mine in Queensland, one of the world’s biggest in fact and one that would require it to unfortunately be shipped out right through the Great Barrier Reef.

In fact, Deloitte recently completed a review to determine the true economic, social and icon asset value of the Great Barrier Reef and concluded that the value was an estimated $56 Billion. The full report can be viewed here.

However, in my view, if you need to communicate to people that the Reef has a $56 Billion value to us, well, then those people are looking at it from totally the wrong perspective. The Reef does not belong to anyone, it’s Earth’s gift to us all. It lies on Australia’s doorstep and as such Australia is it’s guardian, not its owner, Australia needs to lead the protection of it for the world.

We can still do something about this collectively though, its not all doom and gloom. Infact, right on Heron Island at the Research Centre, Professor Ove Hoegh-Guldberg and his team of scientists from the University of Queensland aim to predict the fate of the Great Barrier Reef into the future by subjecting controlled samples of today’s corals to the higher sea temperatures and increased ocean acidity predicted as a result of climate change 100 years from now.

I managed to get a look at the experiment tubs. Their results are eye opening and shocking, it unquestionably shows almost complete loss of the living corals and reef structure. However their experiments also give a faint glimmer of hope too. If we can manage to stick to the Paris Agreement and CO2 emissions can be stabilized and then reduced, then Professor Hoegh-Guldberg’s team and their scenario experiments on the impact of CO2, temperature and water acidity and quality have shown that we can still positively improve the outlook for the Great Barrier Reef, there is still time to save the reef, if we all act now and governments act responsibly for the long term instead of short term political gains.

Heron Island is such a magical place, it really is. I have another follow up blog that will outline my top 20 tips for your stay at the Heron Island Resort. So in the mean time, I really hope this helps to open your eyes as to why we must act now to help protect the reef’s future.

If you would like to find out how you can get involved to help the Reef visit https://www.barrierreef.org/ to explore all the great information on there. Another great resource is https://www.coralcoe.org.au.

September 29, 2017 Sam Lindner Australia, Diving, Great Barrier Reef, Islands, Queensland
Sam LindnerHeron Island | An Underwater Wonderland On The Great Barrier Reef09.29.2017
read more
This website uses cookies to improve your experience. We'll assume you're ok with this, but you can opt-out if you wish.Accept Read More