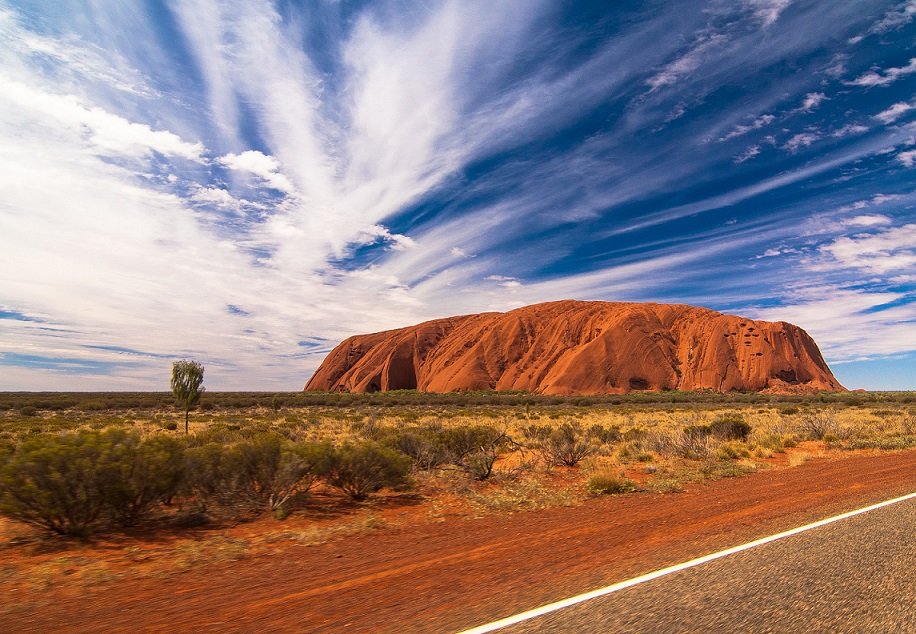 Overview map of where and what Natalie & Sandrine got up to this week!

Sandrine is a lifestyle vlogger and travel enthusiast with a passion for drone photography. She grew up in South Africa and now lives in Perth, Western Australia. She is a brand ambassador for Women Who Drone, so you can expect some pretty awesome drone shots from their journey through the Australian outback!

After saying a teary goodbye to Tom in Sydney, Natalie flew to Adelaide where she would start the last leg of the trip with Ultimate Oz finalist, Sandrine Hecq. The two girls met briefly in Gold Coast two weeks earlier and quickly hit it off. From Adelaide, they would join a 6 day tour with the company Groovy Grape, that would take them through the outback of Australia and up to the famous Ayer’s Rock.

Natalie flew into Adelaide from Sydney, where should we would start the last week of the tour. Adelaide is the state capital of Southern Australia, with more than 75 % of the state’s population living in the city. Natalie checked into Adelaide Central YHA, which is located in the center of the city and and a short walk from the popular Adelaide Central Market. At the YHA, she met her new travel mate, Sandrine and her boyfriend Chris, and together they went and explore the city. Early the next morning they were picked up by the Groovy Grape bus at 6:30 am, and headed up to Flinders Ranges. The Flinders mountain ranges are the largest in Australia, and stretch for more than 430 km. On the first night of the Groovy Grape tour, they were provided sleeping-bags with mattress and pillows, and then slept outside, under the stars. Now that’s how you experience the real outback!

On their second day they continued through the desert landscape and stopped in Coober Pedy, which would be their last stop in South Australia. Coober Pedy is a town that is also known as the “opal capital of the world” and has the world’s largest mining area for opal. But the town has over the last years become more famous for its underground residences, which they call “dugouts”, and where people are actually living and working to this day. Why do they live underground? Because of the crazy desert heat during the day (it can reach as much as 47 degrees Celsius), it is much cooler to stay underground. Sandrine and Natalie got the experience of a lifetime as they enjoyed a tour of the underground mine and museum, learned the history of Coober Pedy, and then spent the night underground in bunkhouse accommodation. They also got to meet some rescued kangaroos at Josephine’s Kangaroo Orphanage.

They crossed the border and entered the Northern Territory state with the Groovy Grape bus. It was a long day on the road, with several stops, on the Stuart Highway, but eventually they reached Kings Canyon, which is on the end of the George Gill Mountain Range and in the Watarrka National Park. Kings Canyon is an impressive canyon with walls that are over 100 meters high, and with a creek at the bottom, known as Kings Creek. It was time to camp outside again, and this time they did so at the Kings Canyon Resort, with stunning views to the canyon, and at the same time easy access to the campsite’s facilities. Over the next two days they drove through and explored the Uluru-Kata Tjuta National Park, which houses the two famous rock formations made out of sandstone; Uluru and Kata Tjuta. The National Park is listed as a UNESCO World Heritage Site and thousands of tourists come every year to see the magnificent rock formations. Sandrine and Natalie got to experience both the sunrise and sunset over Uluru and Kata Tjuta, something they surely will remember.

They woke up early for a walk around the impressive Kata Tjuta rock formation, during sunrise, before it was time for the last stop of the Ultimate Oz journey. Alice Springs, the third-largest town in the Northern Territory would be the last destination. The town is actually located in the very center of Australia, and is a popular stop for tourist who visit the Uluru-Kata Tjuta National Park. Natalie, Sandrine and Chris checked into Alice Springs YHA, which is built within the ground of an old outdoor movie theater! How cool is that? In fact, guests at the hostel can enjoy outdoor movie screenings at night, under the stars. The hostel is centrally located and comes with facilities such as BBQ area, swimming pool and tour desk. It was the perfect location for the last night of the Ultimate Oz journey.

After 6 weeks of traveling through Australia, Natalie’s Ultimate Oz journey comes to an end. For 5 weeks she has explored Queensland and New South Wales with fellow Ultimate Oz winner, Tom, until they reached Sydney and he stayed behind as Natalie continued. From Adelaide, Natalie was joined by Sandrine and her boyfriend Chris, for the last week and leg of the tour through South Australia and Northern Territory. And even though the trip was not as long for Sandrine, she still got to experience an amazing journey through the red landscape and outback of Australia, and get some awesome drone shots. They started off as strangers, but quickly became great travel mates. The Travello team was very excited to follow their journey, and we hope that more people will get inspired to go on an adventure, maybe with some new travel buddies, and get the trip of a lifetime!

Sandrine is a lifestyle vlogger and travel enthusiast with a passion for drone photography. She grew up in South Africa and now lives in Perth, Western Australia. She is a brand ambassador for Women Who Drone, so you can expect some pretty awesome drone shots from their journey through the Australian outback! 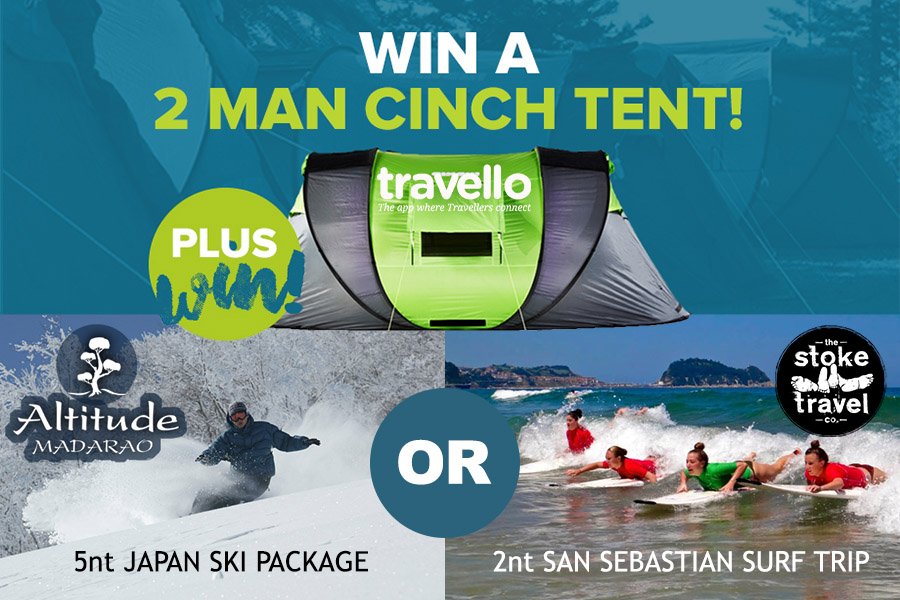 THIS COMPETITION HAS NOW CLOSED!

Create a profile on the app to find out about our next exciting competition coming soon.

This month we’re giving away a great camping prize along with your choice of a ski or surf holiday package!

Winner takes home a 2-Man Cinch tent + the choice of either a 5 night ski package for 2 to Altitude Madarao Lodge in Japan or a Stoke Travel 2 night surf trip in the heart of Basque Country in San Sebastian in Spain!

To enter, first download Travello if you have not done so yet.
Then post on the feed either 1,2 or 3 of these things. If more than one, a separate post for each.:

View more about these awesome tents here through one of their instructional videos below:

THEN YOUR CHOICE OF EITHER A:

This ski package at Altitude Madarao Lodge in Japan includes:


Altitude Madarao is a well-appointed recently renovated full service ski lodge with all the extras to make your stay extra comfortable but with out the price tag. Altitude Madarao is located less than 100 meters from the runs at Madarao Ski resort which is know for it’s high snowfall and great tree skiing located in both Nagano and Niigata Prefectures.

If you are looking for a taste of what the snow and skiing is like at Madarao, then check out the video below:

This surf trip with Stoke Travel in San Sebastian includes the following:

If you are looking for a taste of the San Sebastian Surf Trip with Stoke Travel then check out their video here:

This competition is in no way associated, sponsored or administered by either Apple or Google or the App Store and Google Play.

Plus then the winner has the choice to choose from the following two other prizes:

*Please note flights are NOT included in the prize package

*Please note flights are NOT included in this prize package